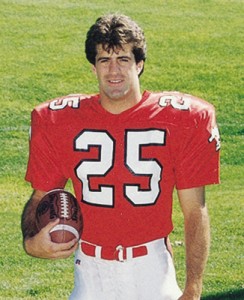 Dave “The Sponge” Sapunjis is an outstanding Canadian, two-times over.

And recently the North Toronto CI alumnus and legend of the gridiron was mentioned amid the Grey Cup festivities as being a future Canadian Football Hall of Famer.

Though he wheels away from the rumour mill, the former Calgary Stampeders wide receiver has seen a record of his matched by Saskatchewan Roughriders’ Andy Fantuz, who led the CFL in receiving yards.

“Now I don’t know what’s going on with the Football Hall of Fame but I do know this year it’s because of Fantuz,” Sapunjis said. “He hit some milestone that I had accomplished so my name had popped up during a bunch of the games.”

It’s a feat that has not been accomplished by a Canadian since, well, the Sponge absorbed every pass to lead the category in 1995.

“I love seeing it,” Sapunjis said. “I know through the grapevine that Andy Fantuz is a classy guy that comes from a family that is very proud of him.”

Sapunjis grew up in the heart of midtown Toronto. He’s a Town Crier Athlete of the Year winner, class of 1986.

After being drafted by Calgary from the University of Western Ontario, The Sponge went on to play seven years in the CFL, amassing 6,566 yards receiving on 460 receptions with 46 touchdowns and a Grey Cup win in 1992.

Now, nearly 25 years later Sapunjis is a father of four and the president of Continental Alloys and Services. That’s not to forget his gridiron past as he is also a co-owner of the Stamps.

“I’m not influential on a day-to-day basis with the Stamps but I’m in the quarterly meetings and I do voice my opinion a little bit,” he said.

He coaches his two sons in hockey and the team has even soaked in Sapunjis’ alias.

“Of course, the nickname is still there,” he said. “As a matter of fact, from coaching my 8-year-old’s hockey team, they all call me Coach Sponge.”

Even with his current life in Cowtown, Sapunjis admitted his Hogtown origins are fresh in mind, as his mom still lives in T.O.

“My North Toronto roots are still very special for me,” he said. “I still keep in touch with a lot of my good Toronto friends.

“It’s the foundation of Toronto, North Toronto Collegiate and the friends and family that helped me do well in both football and after.”