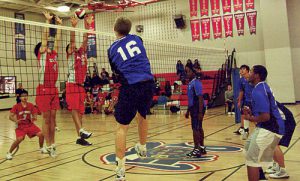 The tension was so thick you could cut it with a diamond blade as Riverdale Raiders rallied to win two straight sets against the North Toronto Norsemen Oct. 14.

Forced to wear the school’s soccer jerseys as uniforms, the senior boys volleyball team didn’t let the change of clothes affect them as consistent play and timely blocks helped them prevail 25-17, 25-22.

Effective defence and service shown in the two sets will definitely help lead the Raiders into the OFSAAs, said coach Ryan Wakelin, who noted his crew needs to learn from every match.

“If you don’t see a game where you’re not learning something then you’re not in the place where you want to be,” he said. “There were a lot of things we still could have done right.

“There were some nice things, but the main thing is teamwork,” he added. “We’ve got to get more games in.”

In the first set a rally of seven points, spurred on by the potent service of captain Colin Bell, helped Riverdale take a commanding lead over their Norsemen rivals.

Wakelin said the consistent and mature performance of Henry Lee, and the stonewall prowess of Jerawl Murrel came in handy when the tight squeeze of the second set materialized.

Additionally, Johniel Simpson was an impenetrable force at the net.

With all the defensive emphasis on Riverdale, there were highlights to North Toronto’s play, coach Elizabeth Markovski said.

“I think we played well overall. Riverdale’s got a really good, consistent team, so kudos to them,” she said. “I think our guys hung in there until the end on that second set.”

The Norsemen started off slow in the first set, but controlled most of the second — and looked to force a third — until Riverdale’s Simpson reversed the surge with an unsettling spike. Key blocks by Murrel deflated North Toronto’s hopes further.

The Norsemen will have to massage their offensive strategy for their next game versus Jarvis Bulldogs, Markovski said.

“We just have to work on consistency in passing because it always starts with a pass,” she said. “And positioning — making sure the guys know where they’re covering, what they’re doing so there’s no confusion.”

Acccording to Markovski, players who kept that in mind while on the hardwood against Riverdale were Henno Einola, Stephen Jeffery, Grant McDonnell and Jonathan Yiu.

As for the Raiders, Wakelin is thinking further into the future, and had a glimmer of optimism in his eyes while doing so.

“We’re looking forward to the rest of the year,” he said. “Our goal is to … compete for the championship in the South Region, but then who knows what happens.”

“We have a lot of grade 11s, so this is not only for this year but hopefully improving for the next year as well.”