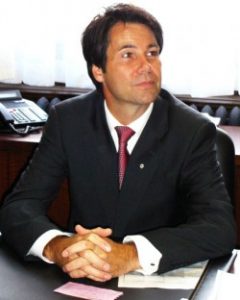 It was a bright and early morning when family and friends of newly elected MPP Eric Hoskins filtered into the foyer of Queen’s Park.

Several of the youngsters in attendance, including Rhys, were given Mountie-uniformed beavers.

Workers on Hoskins’ campaign, and friends from his charity Warchild Canada rued not having their cups of java. Still they braved the morning, flashing smiles and gossiping about politics.

But kith and kin were not there to bathe in the Victorian architecture of Ontario’s legislature or purchase stuffed animals, they were there to witness the swearing-in of the latest political addition to Queen’s Park.

And the Town Crier was allowed to tag along for Hoskins’ first day at the so-called Pink Palace.

When the MPP greeted his 30 some odd guests, he was sporting a lengthy smile.

“It’s great having them here to witness me being sworn in, which makes it even more special,” he told the Town Crier, adding he could invite up to 35 people. “I said, ‘What the heck, let’s fill the room’.”

After introductions, guests were ushered into Room 195 where clerk Deborah Deller directed the swearing-in ceremony.

She joked to the crowd not to blink or they’d miss the entire oath.

After Hoskins’ swearing-in, attendees took photos with the new parliamentarian and took a trip to Hoskins new office, room 330, down the hall from MPPs Peter Shurman, David Ramsay and Speaker Steve Peters.

While his family went on a tour of Queen’s Park, Hoskins prepared for his “kicking and screaming” entrance into legislature.

A common tradition, newly elected parliamentarians are dragged by the premier and house leader to the speaker before taking their seat. In Hoskins’ case, Premier Dalton McGuinty and Deputy House Leader Brad Duguid presented him before Peters.

Outside the caucus office, awaiting his political initiation, a grin replaced Hoskins’ blank face when asked if he was nervous.

“No, I’m excited,” he said. “I’ve been looking forward to this since the byelection day.

“Work has already begun, but this, I think — the taking of my seat in legislature — is sort of the final step of assuming full responsibility,” he added. “I look forward to participating in question period and the debates, house duty and getting a better understanding of the issues.”

“Speaker, I have the honour to present to you and to the House Eric Hoskins, member-elect for the electoral district of St. Paul’s, who has taken the oath and signed the roll and now claims the right to take his seat,” he said.

Throughout question period Liberals, New Democrats and Tories shook hands with the new Grit, who took his seat in the back corner of the governing party’s overflow.

The Harmonized Sales Tax was the hot-button issue during the five-week long campaign, and Hoskins voiced his constituents’ concerns towards Municipal Affairs minister Jim Watson.

“Minister, in my riding of St. Paul’s I’ve had the opportunity to speak with hundreds of renters who are concerned about the cost of living,” he said, adding nearly half of the households in Toronto rent.

Not wasting any time taking a dig at the opposition party, Hoskins continued.

“Under the previous government, the Ontario Rental Housing Tribunal was known as an eviction machine that had no concern for tenants,” he said, over the din of Tory banter. “Would the minister tell us how the Residential Tenancies Act has helped tenants?

“In addition, will the new HST coming into effect next July apply to rents?”

Watson took the opportunity to welcome his new ally in legislature.

“It’s a real honour to receive the inaugural question from the honourable member,” Watson said. “I congratulate him and welcome him to this Legislature.

“I know he’s going to have a long and very productive future in Ontario politics.”

While Tory MPP Lisa MacLeod quipped Hoskins’ was late to the party and parliament knew the answer, Watson replied, saying the HST would not affect renters.

Hoskins’ first question period subsided with the flow of members out the doors he was ushered through. The new MPP was now left to navigate Queen’s Park’s halls, and his post on the Standing Committee on Finance and Economic Affairs.

Within two years it will be another election for the fresh-faced MPP. However, at that time there will be less attention paid to the individual ridings and more on the parties as a whole.