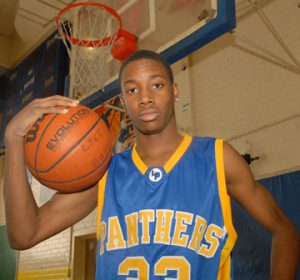 Lawrence Park Panther Brandon John is all heart on the hardcourt.

Not just figuratively, but literally as his coach Cargel Stewart has observed.

“He’s one of the few that will play the whole game and will not need to sub really,” Stewart said. “He works hard in practice because he’s very committed to his cardio.”

With the jump from Tier 2 to Tier 1 basketball for Lawrence Park Panthers the 2009-10 season has proven to be more of a workout. But it’s one that Stewart hopes his players can learn from, especially John.

“The difference between Tier 1 and Tier 2 is the physicality,” Stewart said. “There is more physical play and our players are getting beat up because we are not pushing back.”

For standout John, it’s all about adapting to the newfound pressures.

“You can’t take any days off, especially in the division that we’re in. Every team is good,” he said. “You’re facing new people every time so you never know what to expect.

“You just have to make sure you’re playing your best every time.”

Stewart says John has done well with stronger teams like Eastern Commerce, Jarvis and Oakwood in the mix.

A tournament at Seneca College recently had John averaging 24 points in three games.

“When the other players were not really stepping up, he took over the game himself,” Stewart said. “He’s this go-to guy that I can really rely to take the team and motivate the other guys to work a little harder on the floor.”

With the rough schedule in the South Region, John is thankful for the experience so far, and appreciates Stewart’s decision to move the team up a level.

There’s one more season left for the hoopster, and that means more time to work on his outside shot.

Though John is coy when it comes to what he needs to work on, Stewart said it was only the perimeter that needed some work.

“Right now he’s got great handles, he can go to the well very good, so we’re going to have to have him work on his outside shot to complete his game.”

When John’s not orchestrating the full court press, the grade 11 plays alto sax in the school band.

He’d like to continue to play both b-ball and bebop when university comes calling. He’s already seeing some attention from schools, as his mom has been instrumental in getting scouts to games.

“(My parents) support me with everything I do,” John said. “It’s nice to have them there with me. They always come out and watch whenever they can.”

Once graduation comes, he dreams of another continent.

“I would like to finish up playing professionally in Europe,” John said. “That would be my ultimate goal.

“It’s something different. NBA is obviously tougher to accomplish,” he added. “I think Europe is a very good opportunity to play in, also overlooked a lot.”