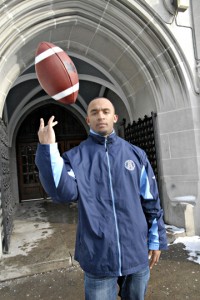 Recalls his start here as a scrawny player in grade 9

Matt Black used to be the one asking the Toronto Argonauts for autographs.

Now he’s the one meeting demands with his own John Hancock as a rookie cornerback for the Double Blue.

With the added attention he hasn’t forgotten his roots with the Northern Red Knights secondary unit.

“I always remember walking into the gym — this little scrawny grade 9, probably five-foot-nothing — got the permission forms and brought them home,” he recalls. “The first thing my mom said to me was, ‘How are you going to play football, these guys are going to kill you?’ ”

Doting maternal instinct aside, Black got the family’s thumbs up and was under the tutelage of coach Jim Hutton of Northern’s junior team.

Though he was not a starter in his freshman year, much to the amusement of his friends, he says, Black worked his way up to starting corner by his senior year.

After making it to the Metro Bowl playdowns in his senior year, his hard work paid off, with him being sought by Saginaw Valley State University.

“That was kind of a whirlwind recruiting process,” he recalls.

After seeing him at a Northern combined practice on a Tuesday, Saginaw’s coach wanted to see Black at a Cardinals practice Friday. But the results were well worth it.

“I went from no scholarship to scholarship athlete,” he says. “It was kind of crazy in that regard, but it was the best decision I ever made in my life. I wouldn’t change it for the world.”

The road to the NFL was on the horizon with a four-year stint in the Great Lakes Intercollegiate Athletic Conference.

“As far as I’m concerned that’s the best conference in Division 2 football,” he says. “Every year we have three or four teams in the top 20 in the country so there are no gimme games.

“I finished 17-3 and missed the playoffs, so there’s no leeway.”

“The competition is always A-One — it really opened my eyes to football at another level,” Black says. “The whole experience of being a college athlete and walking into a new town where everybody hates you and the only fans there are the ones who were bussed in five hours away.

“That kind of experience was really something to me because here in Canada I never really had that, especially as a sophomore.”

Drafted by the Argos in 2008, Black had NFL aspirations. But after a knee injury during Valero Cactus Bowl, he stayed true to the Blue and joined the Argos after surgery and rehabilitation.

“I’m really grateful for that decision because even though the team struggled (in 2009) I had an amazing time and as a player I’ve developed the most I’ve ever had in one season,” he says.

Most of all it’s about giving back to the community that helped foster his career.

And that all started with his high school coach, John Prisco.

“Coach Prisco really became my mentor and kind of steered me in the right direction with regards to football and was a person I went to for advice,” Black says.

“He’s been to at least one of all my games at Northern, Saginaw Valley and Toronto (Argonauts),” he says. “That’s been good lifelong relationship.”