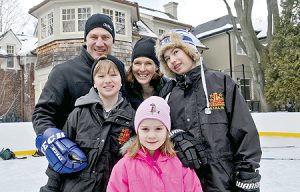 It’s half past five and dawn is casting its early light along the snowbanks. Team Kypreos is transporting skaters out to at least one of three possible practices.

With three children, ages 6, 10 and toe-dragging on the threshold of 12, this is a common occurrence for Nick and his wife, Anne Marie.

“I personally am a huge fan of the morning practice,” says the Rogers Sportsnet Hockeycentral analyst. “Being the only one on the road at that time of day, finding a way to sneak in a coffee or bagel before practice on Bayview is a bit of a tradition for me and my kids now.”

Kypreos is no stranger to the road, being a former Toronto Maple Leaf and Stanley Cup winner in 1994 with New York Rangers.

Still, a penalty Kypreos would like to kill is travel time.

“Our community puts, at last count, over 300,000 kilometres on driving outside of our community to get to rinks,” he said. “So first and foremost being able to play right in Leaside, GTHL games, I think would mean an awful lot to our community.

“That’s pretty much our number one goal, to really embrace our community in an ongoing basis,” he added. “We don’t play games in Leaside, unfortunately, and we should.”

So with that, Kypreos admitted, the Bayview heartline could use another rink because of the rich tradition of hockey there.

“The focus is on a second ice pad, which we feel like we’re getting closer (to), but there’s still some obstacles to get over,” he said. “We feel like we can be the first rink up and running in Toronto in the last 40 years almost.”

When Kypreos uses the second person, he’s referring to all Leasiders who have come to the aid of Canada’s game. Though Maple Leafs GM Brian Burke and Buds legend Doug Gilmour are looking to give a glove up, an entire community is ready to throw the gloves off for their cause.

“There are challenges for sure with the figure skating and the girls hockey, but a second icepad would alleviate a lot of those hurdles,” Kypreos said of getting a new rink. “We’re definitely trying our best to let the next generation hopefully follow in our footsteps of trying fulfill their dreams.”

The hockey tradition that permeates a small parcel of East York also blankets a portion of Kypreos’ property.

As a father, Kypreos is just passing down what he loves most.

“At the end of the day, the only tradition that you want to make sure you pass along is there is only one reason why you play this game to begin with and that is to have fun,” Kypreos said. “The moment it really doesn’t become fun is the moment you’ve got to find something else to do.”

For the Kypreos family, as well as Leasiders, there’s no fun lost, only expansion.