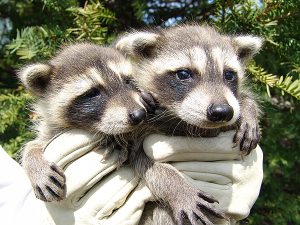 As autumn temperatures plummet at night, offspring of raccoons and skunks are looking for warm places to settle in preparation of winter.

Unfortunately, that has led to an often uneasy relationship between construction workers and the animals, whose destructive behaviours can wreak havoc on a work site.

Raccoons and skunks are the most prevalent around construction sites because “they tend to acclimatize to people quicker than other wildlife would,” said Brad Gates, president and owner, AAA Wildlife Control.

Wildlife control companies average eight calls per month to construction sites. Most calls are animals trapped in garbage receptacles — about six per month.

“Any time a building has not been sealed from the outside, animals are going to get in. Openings could include windows, doors and building materials that have not been installed yet,” Gates said.

The highest frequency of calls occurs in the spring and fall months. Fall is the time when mothers kick their offspring out of the nest, forcing the young ones to find new homes.

“[Animals] will take the easy route in. If they can walk through an open door, a window or an open roof for that matter, they are going to take advantage of that,” added Gates.

“Construction sites are ideal because the workers often feed the animals or do not have proper garbage management.”

There are three options that wildlife control companies have on construction sites: live traps, hands-on removal with snare poles or nets and one-way doors that work at access points, letting the animals out of the building but not back in. By law, wildlife control companies are only allowed to relocate the animals up to one kilometre away to avoid the transmission of diseases.

“Raccoons are very resourceful. Every day, we interact with them, and there’s not a day we do not learn something about how intelligent they are,” added Gates.

Construction workers are fully aware of how intelligent raccoons are. For David Lester, superintendent and project manager with The Rockport Group, animals on-site can cause hassles.

“I’d like to throw them off the building,” he jokes. “Every morning, I would go to the same unit and find raccoon excrement on the same stair and when raccoon urine soaks into the sub-floor, it is a disaster.”

In this particular case, workers must cut out the affected area and replace it with new product. The occasional trade will refuse to work until the animal is captured or removed.

In one case, a crane operator refused to work because a raccoon was hiding under his console of the crane. The operator shielded himself from the animal by the weights at the back of the crane.

“You get these tough construction workers who lose their cool when you put a little raccoon in front of them. That’s the humourous side of it,” Gates added.

“Any time you get a female with babies on a site and you come out with these young animals, the same thing happens: these construction workers have tough facades, but they become normal, sensitive human beings when they see the animals.”