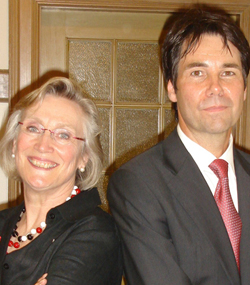 The doctor is in.

Last night the physician and co-founder of War Child Canada was elected by St. Paul’s Liberals through a preferential ballot with 633 total votes.

“Not in my wildest dreams,” he responded to the result, addressing a packed chapel at Timothy Eaton Memorial Church. “I thought the hard part was delivering the speech earlier on tonight.”

Hoskins thanked his wife Samantha, his campaign team and fellow politicians, as well as his opponents, 59-year-old Judith Moses and 33-year-old Charles Finlay.

While away from the podium, Hoskins told the Town Crier he was both shocked and humbled with the announcement.

“It’s so utterly fantastic to be given the confidence, to be trusted to lead this riding,” he said. “The Liberal party is alive and well in St. Paul’s tonight.

“We had three extraordinary candidates and I’m so looking forward to working with Judith and Charles in the days, weeks ahead and even after the byelection.”

Hoskins joked there will now be two physicians who’ll “have a practice together”, since St. Paul’s MP Carolyn Bennett also comes from a medical background.

Though Bennett was mum on who would be the Benjamin Franklin Pierce and the B.J. Hunnicutt of the duo, she said she was ecstatic about the level of democratic interest in the riding’s membership.

“This is very exciting that three fabulous people were prepared to entertain public life,” she said. “The democracy is as strong as the people who choose to go and do this job.

“All three of them understood from the very beginning how important the whole St. Paul’s model is in all three levels of government working well together.”

Michael Bryant, who stepped down as St. Paul’s MPP in May, also said he was impressed by the level of involvement.

“Obviously, I am excited to see who’s going to be carrying the Liberal mantle — whoever it is,” he said, moments before the results were announced. “Thank God I rightly stayed neutral, because it would’ve been a hell of a choice.”

With much celebration, there was still the grounding knowledge that a byelection announcement will be made by Premier Dalton McGuinty soon.