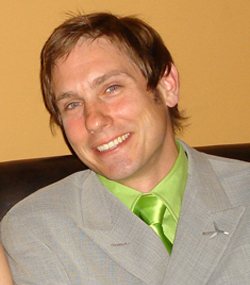 Chris Chopik is in the Green.

The 37-year-old Bosley Real Estate agent was selected last night by St. Paul’s Green Party members as their candidate in the race to replace Michael Bryant, who stepped down as the MPP in May.

“I am delighted that the constituents of St. Paul’s and the Green Party members have given me the opportunity to represent them in the upcoming byelection,” he said. “I think it’s going to be rigorous work and I look forward to meeting constituents and hearing the issues that are top of mind.”

Though he hadn’t planned on running in an election for another decade, he said with Bryant’s resignation the time was ripe.

“I thought that it was a bit of a call to action,” Chopik said. “I spent some time in the legislature working on the Green Energy Act with (MPP George) Smitherman and his staff and other ministers involved.

“That’s been a good introduction to how the legislature works and how comfortable I am there.”

Because of Chopik’s ties to the area, there will be plenty of party support for him, said federal Green candidate Debborah Donnelly.

“He’s very active in the community so I think he’ll represent us very well,” she said. “I’m looking forward to working with him.”

The Green Party has been steadily gaining political ground on other major parties, including the New Democratic Party.

Heller, an education activist, is up for nomination again, along with former B.C. Green Party Leader Stuart Parker, who’s made the transition to the New Democrats.

A candidate will be chosen at a Sept. 9 riding meeting at St. Matthew’s Bracondale House.

The Progressive Conservatives, who ran Lillyann Goldstein in the last election, are looking to recruit Toronto Sun columnist Sue-Anne Levy as their candidate.

She has not confirmed whether she will run.