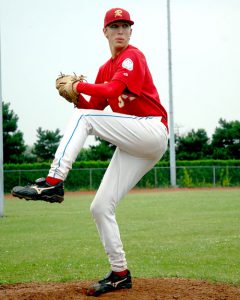 Richview win big after undefeated league playRichview Saints are once again atop the city in senior boys baseball.

Winning the 2010 Toronto District School Board city championships 2-1 over an upstart Forest Hill Falcons roster in June, coach Stath Koumoutseas said it was all thanks to his charges uniting instead of being carried by one superstar.

Batters one through nine all contributed to the scoreboard, while the talented pitching of Matt Cambria and key defence by catcher Gabe Mark and first baseman Jahmal Brooks helped secure the title.

“It was a great year. We ended up undefeated in league and in playoffs through the TDSB,” Koumoutseas said. “We did lose some tournament games but the guys always came through in the big games, a lot of them were close and they always rallied.”

Forest Hill was no different.

Koumoutseas said the Falcons on-base threat midway through the championship led him to put his ace Cambria back on the mound, after pitching a complete game shutout June 21 against Sir John A. MacDonald, to ease the tension.

The result was another solid three innings.

“Our team was pretty good,” Cambria said. “I knew that from the beginning and the only thing that was our problem was we needed a second pitcher.”

Though victors in 2008, Cambria said this year was very different as players who had been injured the two years before had finally tasted the holy concoction of league champs.

“A few of the guys that were on the team then, one guy (Ryan Lackey) had a broken ankle and he didn’t feel like he won the citys with us, he wanted it that much more this year,” Cambria said.

His five years of work at Richview will not go unnoticed. Though Cambria has moved up the ranks through the Etobicoke Rangers rep program, it was Saints volunteer Bobby Hunter who helped him focus.

Now it’s off to Northern Oklahoma University for the starting pitcher, who will join Richview CI alumnus like Joey Votto of the Cincinnati Reds on the path to the majors.

It’s not just the Saints who will be missing their ace when he heads south for the next school session.

“My dad is handling it better,” Cambria said, with a laugh. “My mom is like, ‘My baby is going away’.”