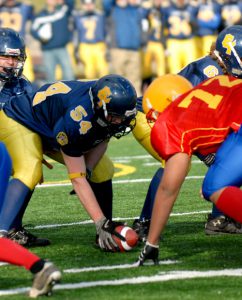 On a day when Mother Nature was at her most erratic, the Northern Red Knights senior boys football squad ignored her whims and dampened the spirits of East York Goliaths.

Head coach Don Dominico said he was thrilled by the victory, especially in such adverse conditions.

“The guys played great and you know we had to put up with pretty crazy weather conditions there for a while,” he said. “It’s nice that we’re playing on a good field anyways because last week we played at home against (Central) Tech and it was a complete mud bowl.”

It was the fourth year in a row the Red Knights met the Goliaths in the finals, and the third straight time Northern claimed victory.

“The weather was the least of our worries,” he said. “We definitely had a rocky start to the first half.

“They had a good team, good structure, good execution and we just weren’t able to finish what we expected to.”

Goliaths starting quarterback Aleksa Radevski was fighting off the flu and was pulled after three plays. In his stead was Calvin McAnsh, who played with a cracked knuckle.

The result was an unorthodox style of shot-putting passes out of the pocket.

“He couldn’t grip the ball at all to throw, so he had to sort of rest it there,” Edwards said, adding McAnsh impressed while on the receiving end of third-stringer Jordan Ball’s pass.

That play, in torrential hail, led to the only score for East York with 48 seconds left in the first half.

Heading into halftime with the score 24-7, Edwards voiced his disappointment to his charges.

“We needed to just increase our level of execution, our level of passion, and try to get them fired up and get them angry enough with their resolve to want make some change,” he said.

It seemed to work. In the third quarter, the Goliaths kept the Red Knights off the score sheet.

“We were able to do certain things but unfortunately not having the opportunities to throw the ball, you’re pretty much limited to run the ball and you don’t have a balance with that,” Edwards said.

But the fourth quarter saw two more Northern TDs, including a 63-yard kickoff return by Brandon Williams with a failed convert, and a two-yard punch-in by Chandraku Pirashanth.

Dominico said his charges played when it really mattered.

“We hung in together,” he said. “We only had one interception, one turnover, and that was right at the end of the half when we were trying to get a score.”

Next will be a tough Nov. 10 battle against Don Bosco, which won the North Region finals 20-7 over the Chaminade Gryphons.

Taking to the field after the Northern-East York match, Dominico was reticent on Northern’s return to the TDSSAA finals, as he admitted both Bosco and Chaminade have explosive talents.

“I think these two teams are both the emotional types and they’ve put up big scores all year long,” he said. “I’m sure whoever we play, we’re going to have our hands full.”