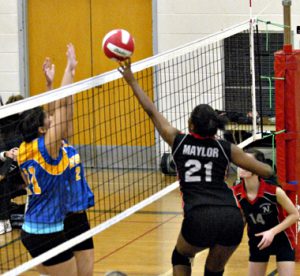 The universe often has its own sense of humour: big things always come in threes.

Such was the case of Newtonbrook North Stars versus CW Jefferys, as it took three hard-fought sets to determine a victor Dec. 2 in senior girls volleyball play.

For Newtonbrook coach Mia Kim, their first game was a test for her new recruits, members of last year’s junior squad.

“Pretty much I was happy with all the girls because a lot of them are new to playing at the senior level, so it’s a step up for them,” she said.

The game kept the girls on their toes as the back-and-forth first set lasted 62 points before seeing a victor. After a close in-bound call from the official gave the North Stars a 31-30 lead, they were able to connect for the clincher.

Hoping to carry that momentum into the second set, they were bounced by a strong performance from Saints captain Kristan Luong who carried the play with two straight serving aces before Kim called a Newtonbrook timeout.

Luong’s play — and the activities of the rest of her crew — pleased CW Jefferys coach Terrill Samuel.

“I was happy with how they played because at the beginning of year you want them to be able to move into their positions, backup and hit well, but they did that well,” she said. “The only thing they did poorly was when the ball came over early they weren’t ready to pass.”

With Kristan’s sister Michelle Luong serving for the Saints, they managed puzzle flustered North Stars D, and slowly pulled away, taking a 19-15 lead.

But the consistent service of Adina Levy powered Newtonbrook into the lead, as she racked up eight points with a formidable display of patience and perseverance.

It was all for naught though, as the Saints battled back reclaiming the lead and winning 27-25.

In the third, Newtonbrook won the coin toss and chose to serve first. Initially the Saints had the momentum, but it swung on two plays: a terrific dig by Levy and a standout block by Joanna Maylor.

No easy contest, the North Stars still managed to pull away and win 15-12.

“We just rocked,” Hayes said, who would cheer with her teammates after every missed shot in game.

“We didn’t get down on each other when we made mistakes,” Maylor added.

The communication was key, said Kim, and her charges picked up that cue as the game progressed.

“There’s a lot of movement in the game and the team is a mix of girls that played last year and some girls that came up from junior,” she said. “So the way they’re playing as a team right now is they’re not always communicating.

“But as we went from set-to-set, that really improved,” she added. “I think that once they were able to do that, then the blocking and our own offence worked well.”

For their next match Dec. 9 against William Lyon Mackenzie Lyons, Kim said they needed to work on their delivery.

“I would really like to get passing so we can get more hitting in,” Kim said. “I think the game always has to start with passing and defence, so that’s something we have to work on for the entire season.”

“We definitely have to work on our passing — just calm down and get a nice pass out to the setter,” she said. “Once we get that down we can execute our hitting better.”