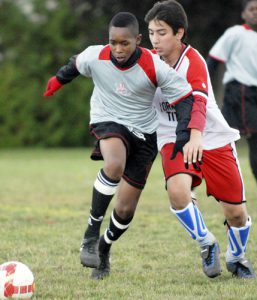 Strong presence in second half keeps opponents off the score sheet

With a little added pressure in the second half Newtonbrook’s junior boys soccer team was able to shoot past York Mills Titans.

Right from the starting kick-off the North Stars were on York Mills like green on grass, but the Titans managed a direct shot by Michael Tan on goalkeeper Sepher Golabian.

After the break it was all Newtonbrook as the team tightened up its defence and applied pressure deep in York Mills’ zone which led to wide open Aryo Arman blowing a shot past Golabian in the penalty zone.

“I told them to use their wings more,” Clish said, adding they became more effective and struck with precision when they turned to the outside rather than the inside.

Titans co-coaches Tim Heffernan and Alison Zigelstein said a lack of discipline led to a defensive collapse and an own-goal by Richard Seto gave Newtonbrook a 1-0 lead before the half without the North Stars having a single shot on goal.

“There were one or two (shots) where we hit the post, but overall we can’t complain, they were the better team,” Heffernan said. “(Newtonbrook) deserved to win.”

With the two goals scored against them, York Mills now knows what they need to work on.

“It was (demoralizing) because they were both on defensive errors,” Heffernan said, adding defender Seto’s scoring on his own net and crossing the point into the Titans’ penalty area led to the North Stars two notches.

Zigelstein added the Titans need to work on developing team spirit, but on the upside, she praised the defence for its strong play, naming defenders Gordon Lau and Adam Wardcinski and keeper Ari Sahsuvar as the top performers.

York Mills hopes to be a tighter unit at home against the Victoria Park Cougars Oct. 8.

The team was looking to carry its victory into the next game against Downsview Oct. 6, and they did, pelting the net for 4-0 victory.