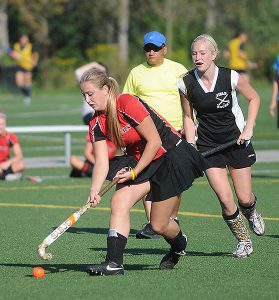 A rematch of last year’s field hockey city championships between Black Knights and Lancers was an experiment in the unexpected.

With 11 of Malvern’s dozen graduated, and Leaside only having two returnees, no one quite knew what to expect in the rivalry that had seen Leaside take all three meetings in 2010 by a score of 1-0.

On Oct. 4 at Cherry Beach West, the two rivals played their first match against each other for the new campaign, and the 4-0 result was a surprise, especially for Malvern’s winning coach Lesley Gage.

“I didn’t know what to expect because essentially a majority of our Tier 1 starters from last year graduated,” she said.

“They’re good, but we were just doing a lot better,” she said. “Our ability to just stop and pass the ball — our control has gotten way better.

Moody was one of four who notched goals past rookie Leaside goalkeep Hannah Farache.

Opening the first half scoring for Malvern was Ciara Morrison, followed closely by Zoe Martin who batted the ball out of the air and past Farache.

In the second Mo Wright-Stein and Moody added to the score off of a short corner.

Moody attributes her team’s improved skills to their coming together quickly as a unit.

“I think that because everyone’s been together for so long it’s just like that we’ve bonded together,” she said.

Leaside’s coach Sara Jones, along with assistant Mary Morrison, admitted the squad is in rebuild mode after making OFSAA in 2010. They are depending on the leadership of defender Sarah Dickson and goalkeep Lindsey Allen, who was absent for the game.

“We’ve got a lot of new grade 9s with a lot of potential,” she said, adding the team is not running low on enthusiasm.

That spirit may be best exemplified with the team’s sartorial choices. At the beginning of the year, the plethora of grade 9s came across leopard print socks.

“They were enthusiastic, so we said, ‘Okay, we’re going to be gold and leopard print’,” Jones said.