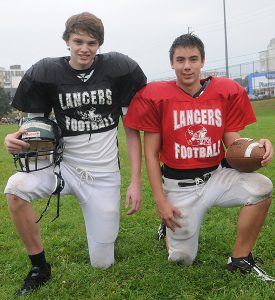 Leaside’s offensive and defensive lines are the chink in the defending South Region champs’ armour.

“We lost a little bit of size,” said Lancers coach Jim Georgiadis with trepidation in his voice. “Our offensive and defensive lines are not as big as they have been in previous years. We’re a little bit short in numbers at that position as well. We don’t have a lot of depth at O and D line.”

But what the front lines lack, the Lancers are hoping to make up with their offence and special teams.

“If we can execute on offence, we should be able to score some points,” he said. “Defensively might be difficult. We should be okay on the cover game but in terms of getting pressure on the quarterback and being able to contain the run might be a bit of a concern this early.”

What will help in staking a playoff spot will be leadership from returning quarterback Daniel Giacomello and corner Alex McGillvary.

“When you lose guys like Morgan and Yann … not only are you losing skilled players, you’re losing a lot of leadership,” Georgiadis said. “A lot of teams had a lot talent but I think what separated us from the teams in the league was honestly our leadership.”

Repeating one of the best gridiron performances in recent Lancers history will be a tough contest, especially with the gaps in the defensive line that coordinator Csaba Vegh will have to fill.

Even if the team adapts to the loss in size, Georgiadis is aware the rest of the South, along with recent addition Chaminade, will be focused on beating Leaside.

“We know, playing in the South, it’s not going to be easy,” he said. “Obviously teams are going to be, I wouldn’t say they’re gunning for us, but on the schedule they’ve probably circled our name.

“It’s a game they’re looking forward to, and of course teams that lost to us last year are looking to redeem themselves this year, especially Central Tech who lost to us twice last year — once in regular season and in the playoffs,” he added. “I know (Blues coach) John Franklin is going to have his team really prepared for us.”

The Lancers opened their season against Mark Harrison and his Lawrence Park Panthers, Sept. 22, the results of which weren’t know at press time.