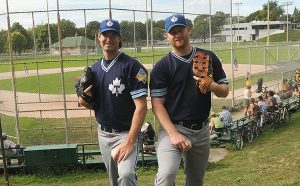 Christie Pits sits silent after another season of Toronto Maple Leafs baseball, one that saw them make their deepest push into the playoffs since 2007, when they won the Intercounty title.

Late one night, fresh from a trip to Cape Breton Island, pitcher Drew Taylor called to share one of the most memorable seasons for him.

“A lot of it had to do with the deep pitching staff this year and we had guys who filled in gaps,” he said.

He credits starters Marek Deska and Mel Melehes, with earned run averages of 3.32 and 3.75 respectively, as being key in the rotation. But Taylor adds his coming off the disabled list helped in their playoff drive.

Fully recovered from elbow surgery on his right arm, the southpaw returned to the Maple Leafs pitching 25 innings with a 2.16 ERA and 12 strikeouts.

He admits though it was a rushed return.

“When I went through all that I didn’t even have time to get back to just throwing the ball softly and getting back into throwing shape,” Taylor said. “It was a bit of a climb through the first part of the season to get ready.”

Still, in between he eased back into being on the mound, helping the Maple Leafs to their 22–13 record.

“I took my time and came back by the end of the year,” he said. “I felt I was pitching strong and had a good finish.”

A key moment came in a July 19 game against the league-leading Barrie Baycats. With a win, it would secure the Leafs second overall.

“I ended up getting the start after coming back and I threw into the eighth inning,”

Taylor said, adding he threw for 7 1/3 innings, gave up three hits and no earned runs.

During the season he ended up starting only two games, but for the playoff run Taylor was in the rotation.

A problem throughout the season, he admits, was consistency.

“It seemed to be, if we would score eight runs, our pitchers would have a rough game and give up nine,” he said. “If our pitchers were doing really well, and gave up two or three runs, we’d only score one or two.”

After eliminating the Burlington Twins in six games, the Maple Leafs met Brantford Red Sox, league champ for the past three seasons, in the semifinals.

The boys in blue went up 2–0, let the Red Sox tie the series and then went ahead with a 9–2 win in game 5. Then Brantford replied, including in game 7 where they won 9–3.

Taylor was pitching and allowed seven runs in the first inning.

“I would say that was the only game that I had where I felt like I didn’t have a lot of success,” he said. “I talked to a couple of guys from Brantford after the game and they said I was pitching fine, it was just that they were swinging the bat and putting balls in play.”

Toronto had a couple of defensive errors in that same game, and a few walks on Taylor’s part led to Brantford manufacturing runs, he added.

For the 2011 season, there were standouts at the dish.

Utility Rob Gillis came through in the playoffs. Jordan Castaldo batted .412 in the regular season with six dingers and 29 RBIs. Jeremy Walker, who had teammates worried he would retire, returned to the roster for another trip around the horn, batting .338 with three homeruns.

“Our lineup all the way through was really strong,” Taylor said, adding Kern Watts was Mr. Clutch. “He hit a grand slam for us in a game we ended up coming back and winning.”

As for a fifth season for Taylor, it all depends on medical school.

“I will hopefully have the opportunity to play next summer, no matter where I end up going to med school,” he said. “I feel like I can still compete and I have a lot of fun.
“Really, that’s what keeps you going.”