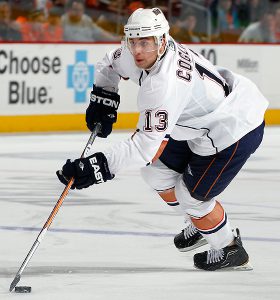 Woodbridge’s Andrew Cogliano talks about his trade to Anaheim Ducks

Woodbridge native Andrew Cogliano has left the Albertan prairies for the sunny climes of California.

The four-year Edmonton Oiler centre was sent to Anaheim Ducks on July 12 in exchange for a second-round pick in the 2013 NHL draft. Back home for the summer, in the Kipling Avenue and Highway 7 neighbourhood where he grew up, he took a moment to share his excitement about the transaction.

“I enjoyed playing in the Canadian limelight — having that pressure — and now I kind of go to the west coast where things are a little more low-key,” he said in an interview with Vaughan Today. “It’s more laid back but also hockey is very important to the Ducks and they have a winning atmosphere.

“I think it’s a new type of pressure now, where I’m going to have to come in and gel and be a part of the winning attitude there.”

Taking a reprieve from his pro talk, Cogliano takes a breath, then recalls the skate path that brought him to the NHL.

“(Woodbridge) is always a great place to live and have an opportunity to play sports in,” he said. “I was always a guy who played soccer in the summer and hockey in the winter.”

His parents, Carm and Teri Cogliano, have proven to be the biggest influence during the formative years of the 24-year-old’s life.

“My parents pushed me along, kept me focused and on the right track to where I am today,” he said, adding he’s had help from mentors from his days with Vaughan Panthers, Vaughan Kings and St. Michael’s Buzzers too.

Barry Harte coached Cogliano from his first days on the ice up to junior AAA in Vaughan, and Chris DePiero, current OHL bench boss for Oshawa Generals, taught him while playing for the Buzzers.

The lessons learned through both family and teachers led Cogliano to gold medals with the Canadian junior team in 2006 and 2007.

He was taken 25th overall by Edmonton at the 2005 entry draft in Ottawa — the same year Pittsburgh chose Sidney Crosby first overall.

No stranger to trade rumours, Ottawa came into the picture again for Cogliano in the 2009 offseason when the Senators offered the Oilers Dany Heatley in exchange for him, Ladislav Smid and Dustin Penner. The deal fell through when Heatley exercised his no-trade clause.

Cogliano says he saw the talk between the two teams as a compliment.

“I took it as more of a flattering situation where the other team in Ottawa was going after a guy like me,” he said. “They were willing to give up their big-name guy.”

As for his recent transaction, he has no issue with Edmonton sending him to California, admitting the natural process of rebuilding one the NHL’s storied franchises was inevitable.

“I did everything I could to bring another element to the team (and) had a great relationship with the coaching staff there — it was really awesome,” he said. “At the end of the day they had to go in the direction of bringing in some older guys and try to fix things up.”

“They always have high-end players, and I’ve played against them over the years, so I know how good they are,” he said. “It’s going to be nice to be on their team and hopefully add to the mix.”