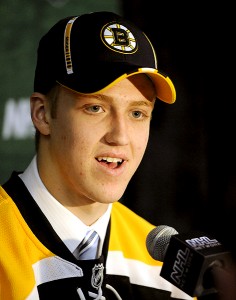 There’s a chance for Crestwood alum Dougie Hamilton to be suiting up for the Stanley Cup champ, Boston, this season.

Drafted ninth overall this past June by Bruins general manager Peter Chiarelli, the defenceman will be heading to the TD Garden Sept. 18 for the team’s rookie camp.

Hamilton, while at camp with his OHL team, Niagara Ice Dogs, is positioning himself with a wait-and-see attitude.

“I’m not really too worried about it,” he said. “Obviously, they’re a really good team with good players so they’ll know what to do with me.

“I’m looking forward to next year and seeing what happens.”

For him, the opportunities with the Ice Dogs this season are exceptional, including a drive for both the J. Ross Robertson Cup — awarded to the OHL’s playoff champion — and the Memorial Cup.

“We’ve got a lot of good returning players, it’s kind of their last year and a couple of other guys are moving on to the NHL with (Mark) Visentin and guys like that,” he said.

Among that roster of OHL over-agers is his older brother Freddie, who was taken 129th overall in the 2010 draft by San Jose and Ryan Strome, who went fifth overall to New York Islanders in the same year as Dougie.

The experience around being drafted has been an educational one for Hamilton, who admits the media attention takes some getting used to.

“It’s definitely tough,” he said. “You’re not really used to it. You just say what you want and try to be the guy that you are.

“So for me, I think I’m pretty smart — you practise that stuff and you say the right things.”

But when the NHL draft in Minnesota took place, Hamilton’s excitement reached a fever pitch, especially when he was picked in the spot traded to the Bruins by the Maple Leafs during the Kessel transaction.

“I wasn’t really sure where I was going to go,” he said. “I also thought it was kind of cool, as a Toronto kid, being a part of that trade.”

Sports are a way of life for the Hamilton boys, as they grew up in the Bayview and Lawrence area with Olympians for parents.

Their mother Lynn Polson played for the 1984 womens basketball team in Los Angeles, while father Doug Hamilton won bronze as a member of the mens rowing team.

“That’s kind of been something that my parents have kind of helped us with and told us that, ‘You always need to do well at both things and do your best’,” Dougie Hamilton said. “It’s just been a lot of fun, the whole journey, and it’s not over yet and I’m looking forward to the next couple of years.”