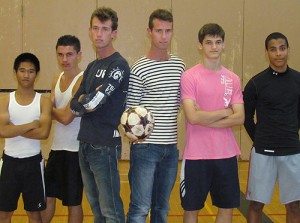 On-field experience being touted as asset for varsity boys soccer

There’s a wave of anticipation cresting in the Falcons’ aerie these days.

Forest Hill’s varsity boys soccer runs deep with their talent, and with that, coach Mihai Sinevici has the city championships in his crosshairs.

“Having so many strong players — mature grade 12s ending a four-year cycle — I’m hoping to go as far as possible,” he said. “At least semi-finals, that’s our goal with this team.

“Hopefully with the experience this team has gotten over the four years, it will take us there.”

This season, Sinevici will not be the only coach on the sidelines as Howard Russell joins the squad as co-coach, arriving from Central Commerce with 18 years’ experience.

“It’s a huge help because sometimes having someone next to you in the heat of the moment, we could have two different opinions, and the co-coaches can be the best ones,” Sinevici said.

The first task for the tandem bench bosses was to suss out players from the nearly 50 students who tried out for the soccer team.

Finally settling on a roster of 21 players, Sinevici said there were standout performers, but the team’s depth should provide enough wind beneath the Falcons’ wings to fly through the season.

“This time around, our forte is the group,” he said. “We don’t have fabulous players as we had several years ago but we do have the group.”

Returning to the team this year are twin midfielders Marc and Pierre Poilbout, strikers Julian Alvorado and Michael Nguyen, along with defenders Brandon Graves and Victor Dudnic.

The only concern facing Sinevici is the span of time between TDSSAA soccer championships and the provincial tournament.

“If we finish the season, in the finals, we have to play OFSAA next year,” he said. “There’s a gap of seven months and it breaks up our continuity.”