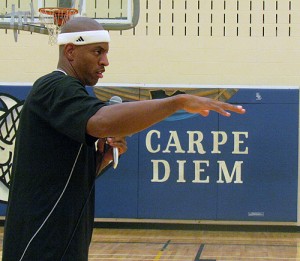 To the delight of Earl Haig students, past and present, former Raptor Jerome (Junkyard Dog) Williams entertained all with his b-ball prowess.

But the fan-favourite was not only there to shoot hoops, he was there on a mission: as ambassador to the Toronto District School Board’s fitness campaign, Fit For Life.

Mobbed by students after the game, one that saw Earl Haig’s all-time team beat Hoops4Hope 50-46, Williams was candid about why he joined the sporting project.

“When they approached me about being their sports ambassador I was more willing to support healthy lifestyles, healthy fitness and education,” he said. “Chris Spence has been a real advocate for education and really encourages students to not only achieve their goals in life but strive to be the best they can be.

“Those are the same attributes that I live by, so I was more than happy to really support the fans who supported me throughout my career.”

In the stands, amid the throng of Raptors fans requesting photos and signatures, Dan McFadden, the school’s head of phys ed., watched the positive influence the Fit For Life announcement made on students.

“They want us to do initiatives that get certain segments of the population that may not be going out for the teams or the clubs,” he said. “Some of the ways we can do that is come up with intramural opportunities that may not just get your typical varsity athletes that go out for sports.”

Schools across the board are encouraged to form health and action committees getting students, teachers, parents and community partners more involved in promoting the national standard of 150 minutes of physical activity daily.

McFadden admitted schools will have to learn to adapt fiscally.

“Schools always have a tough time with dividing their budget equitably, but we have a very supportive administration that is helping us do what we want,” he said. “I think the initiative announced today can only help us do things in the future.”

Kourtis, taking a breather from a tough game of hoops, said the focus isn’t entirely on the physical fitness.

“Mental well-being is the big issue here,” he said. “We talked about anxiety, depression.

“If you’re not healthy you can’t reach your full potential.”

Getting kids active, and observing healthier lifestyles both mentally and physically has its benefits too.

“I think this is proactive instead of reactive,” he said. “This is beyond education, this is society.

“If kids enjoy moving and if they’re active at school, playing at school, a by-product is they’re going to want to play sports.”

As for Junkyard Dog, he’s eager to visit more schools, as Toronto holds a warm spot in his heart.

“It’s the people and the culture, the whole atmosphere of Toronto. I love it,” he said. “Two of my kids (Gabriel and Giselle) were born here, so I’ve got half-Canadians at home, and I’m very proud of that.”