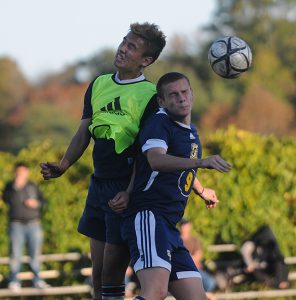 In the muddy field behind Marc Garneau Collegiate, two teams poured zeal into their shoes in the hopes of remaining undefeated in Tier 1 boys soccer.

East York traveled into the land of Cougars with a 3-0 record on the line. Their hosts were just as hungry to remain undefeated, and the game that transpired one Oct. 5 was exemplary of such tenacity.

But it was a Jorgo Nika header off Halil Satin’s corner kick in the first half, that won the game for the Goliaths.

“It feels pretty good to pick up a win away, especially against a team like this,” said Nika. “They were undefeated, we were undefeated and we wanted to stay undefeated.”

After asserting themselves at the net for a good portion of the first, seeing crossbars hit and balls sail just wide of Cougars goalie Edayat Adel, EYCI’s striker Xhavit Caushi and midfielder Nika headed into halftime confident.

That rubbed off on their coach Rob Wheeler.

“We went with the same starting lineup we always use and we just kept it calm and it paid off,” he said. “We never felt too pressured at any point.”

It was during the breather that Marc Garneau made an attempt to tame their restless midfield.

Cougars Glenn Graham attributed an unfocused start to the squad’s lackadaisical formation in the middle.

“They were playing hard going forward with the strikes, but kind of taking their time coming back,” he said. “And leaving a lot of space on the midfield.”

“They’re a very good team with a lot of skilled players, and we gave them maybe a little too much respect on the ball.”

After changes to the midfield and collapsing the defence into their own zone, the Cougars had more opportunity to strike, including a close call in the dying minutes of the game by strike Shefa Mehrzai.

The physical natural of the game, though, led to the booking of Marc Garneau midfielder Kelvon Dominique.

“I don’t know if it took anything out of our sails,” he said. “We had guys ready to go in. Our thing this year is character and discipline on the field.”

“He won balls against a lot taller guys — they’re a big team,” he said. “He’s not the tallest guy. He keeps us stable back there.”

Graham did not exclude Adel from his praising, as his netminder allowed only his first goal in four appearances.

In addition, moving sub one Juan Novoa into the midfield electrified the offence.

The South Region is seeing great depth from Jarvis, Western Tech and East York, but don’t count Bloor, College Francais or even the Cougars out.

“The boys were up for East York,” Graham said. “There’s a bit of, not animosity, but a rivalry for sure.”