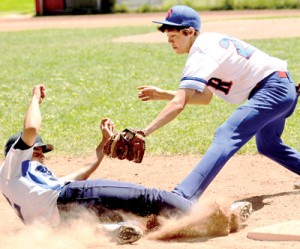 Back-to-back Tier 2 baseball championships felt good for Riverdale Raiders as they basked in their 3-0 victory over Central Tech Blues June 9.

Pitching a complete game shutout for the east-end school was Adam Sebesta, striking out 12 batters and allowing only three hits.

In addition to his dominance over Central Tech’s batters, the grade 11 ace helped out his own cause by cashing in the first run of the game in the bottom of the fourth.

“It was good,” Sebesta said. “I definitely wanted to help out myself and Josh (Grisell), of course getting a good hit like that you didn’t want to leave anybody stranded, which we did do in the first couple of innings.”

The series of events heading up to Riverdale taking the lead started in the top of the fourth when catcher Grisell took a foul ball to the left groin.

Recovering nicely from the pain, the grade 12 pitch caller led off the fourth with a triple to right, later to be brought in by Sebesta’s gapper to left centre.

In true Raider fashion, Grisell shook off his sore spot.

“Going up to the plate I was basically saying, ‘Wow this hurts,’ and I was like I have to deal with it because I’m not going to get subbed out,” Grisell said. “When I got to third I finally realized how much pain I was in, so I had to take a few breathers.”

Riverdale’s third baseman Michael Bowen would later bring Sebesta in on a ground out to short.

Raiders co-coach Ryan Wakelin was impressed by the conduct of his players in breaking the scoreless deadlock.

“Both teams played very well,” he said. “The 3-0 score is indicative of the pitching, defence and still some good hitting.

“The first couple of innings we had guys on second and third and we just couldn’t get them in.”

Riverdale would add a third run in the bottom of the fifth with Victor Azzarello scoring on a fielding error.

Still, in the top of the sixth, the 3-0 lead was threatened as Blues shortstop Daniel Procopio nailed a deep fly out to right field where Riverdale’s Skylar Kaneko lost the ball in the sun.

Able to recover from the error, Kaneko threw a greedy Procopio out at third.

It was the turning point of the game, ceasing any chance for a comeback by Central Tech.

The win came as a sweet ending to a tough season, Wakelin said.

“Two years in a row and it’s certainly never easy,” he said. “We’ve had a couple of tough games.

“I thought that both teams in terms of caliber this was one of our better games,” he added. “Both teams had really great sportsmanship, which is nice to see, and you know it was a beautiful sunny day for the fans.”