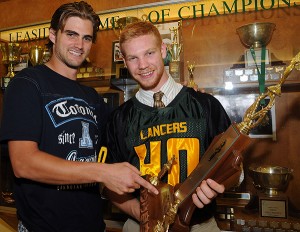 Mike Bradwell grateful for trophy being renamed after him in 2009

At Leaside High School, academics means as much as athletics.

Every season, the Lancers football coaching staff honours its top performer both in the class and on the gridiron with the Mike Bradwell Award.

Coach Jim Georgiadis and defensive coordinator Csaba Vegh proposed to rename the award after Toronto Argonauts special teams receiver Mike Bradwell in 2009, a Leaside alumnus with one of the highest averages in his graduating year.

“When Mike was drafted by the Argos and then subsequently made the team, we renamed the award,” Vegh said. “We sort of modeled it after what several universities do when they give out an award for academic excellence as well as athletic achievement.”

That was three seasons ago, but the award’s naming still resonates with the receiver, especially after Corey Hafezi, Andy Huckle and Morgan Moskalyk have all won the award under Bradwell’s name.

After one of the hottest practices of the year, and coming off an injury Bradwell took a few minutes to share his thoughts on the accolade.

“That’s something I’m very, very proud of,” he said. “I had a great time at Leaside, it’s a great school and if I can do anything to help the program — if they want to name an award after me, that’s great.”

Though he only played one season for the Green and Gold, before heading to McMaster for engineering, he still recalls his crowning achievement.

“We hadn’t won a Tier 1 playoff game ever at that point at that school,” he said. “I remember we went to Etobicoke Collegiate and we beat them. I had a kickoff return for a touchdown and I think I had a couple of touchdowns.

His continued presence, long after graduating, has left an impression on this year’s recipient Morgan Moskalyk. The linebacker graduated with one of the top grades — good enough to score him an advanced entry opportunity at the Richard Ivey School of Business at the University of Western Ontario.

“I see myself as Mike Bradwell because he finished university, got his engineering degree and that’s definitely what I see myself doing,” he said. “Now in terms of the CFL aspects, sure I’ve got some athletic ability and whatnot, but I’m very proud of myself to be an athlete that associates with a CFL player like that.”

Moskalyk is taking a duel program of engineering and business. He’s given some thought to trying out for the Mustangs football squad in his first year, but a full course load may push it to his sophomore season.

“Having to cope with engineering, I’ve found out that my schedule is 32 hours a week of school, I know Mike Bradwell didn’t play his first year,” he said. “He walked on the second year, I believe.”

The 2010 campaign proved to be one of the best in Leaside history, as they made the Citys against Richview, only to lose 16-14.

“Overall I’d say it was a great experience not only with academics did I learn something, but with football I learned camaraderie I shared with my friends,” Moskalyk said. “It’s something I won’t forget.”

Something else he won’t forget is the work Georgiadis and Vegh put in the team.

“The coaching staff, like Jim Georgiadis, I wouldn’t have been able to do it without those guys because they guided me along the way and gave us the skills on the football field,” he said. “(Georgiadis) is a little bit of a role model of mine.”