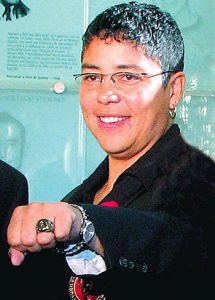 Angela James played shinny in Flemingdon Park to learn the basics of hockey.

“We played hockey on the roads, we played hockey in the garage or out in the outdoor rinks,” she said. “There wasn’t a lot of organized hockey so for me there was just the house league.”

Over three decades later she has found herself in the Hockey Hall of Fame as one of the first two women inducted into the hallowed institution.

On June 22, the 46-year-old was honoured along with her one-time ice rival Cammi Granato.

The whole experience was overwhelming, especially when she was first notified, James said.

“When I first received the phone call from the committee, I was at home, talking on the other line with the CBC and they were asking me what are the chances of a girl going into the Hall,” she said. “The phone kind of beeped and … it was the chair of the hockey committee calling and yeah, it was pretty emotional.”

James admitted she’s glad she wasn’t the only one scoring a first nod.

“I’m certainly glad we went in together,” she said of her induction with Granato. “I don’t think I could have handled something like this on my own, I’ll tell you that much.”

Since her departure from the international stage of hockey, she has not hung up skates just yet.

She’s on the ice five nights out of the week. James is also the recreational coordinator at Seneca College.

As for predictions as to who will follow James and Granato to 30 Yonge Street, she has three picks: former teammates Geraldine Heaney and France St. Louis, as well as builder Fran Rider.

“I’m not sure that every single year you will get a female but I think there’s enough of us out there that it should be — for the next little while anyway — to kind of catch up.”