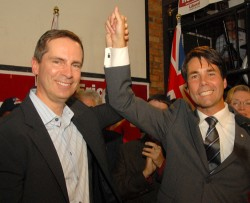 “I’m so humbled by the response of the residents of St. Paul’s,” Hoskins told the Town Crier while at the Sports Centre Cafe. “I’m overwhelmed, excited and it was a fantastic campaign.”

Hoskins took over 47 percent of the total vote and bested Levy by more than 4,700 votes (with 14 polls still to report).

While he was clearly enjoying his win he won’t be celebrating for too long as he says he has work to do.

“I think the next step is to open a constituency office so people know that I’m there, I’m accessible and the issues that are important to them, they know they can count on me to work with them,” he said. “Beyond that, I’m going to continue to provide the strong leadership and representation that St. Paul’s is used to, needs and deserved.”

The victory party crowd was a who’s who of the Liberal Party including Premier Dalton McGuinty, St. Paul’s MP Carolyn Bennett and Deputy Premier George Smitherman.

“I think (his victory is) reflective of the fact that he’s a fantastic candidate,” said Smitherman. “He’s worked extraordinarily hard and for a young guy he’s got an extraordinary track record.

PC candidate Levy was disappointed by the election’s outcome but was praised by party leader Tim Hudak praised her and her efforts in the campaign.

“I have seen a lot of candidates in my day. This woman was out each and every day fighting for the rights of middle class people,” he said. “A tenacious, feisty, hardworking person in Sue-Ann Levy who would remember the people of St. Paul’s each day.

“I’m proud to have a candidate like Sue-Ann Levy to carry the PC banner.”

For her part Levy said the experience was a good one that had her out and about the riding meeting thousands of voters.

“Despite the result I wouldn’t have done it any other way,” she said in her concession speech. “I went through three pairs of shoes and knocked on 6,500 doors.”

Levy said she plans on returning to the Toronto Sun next week where she will continue to chide Toronto Mayor David Miller for his policies.

“I’ve grown as a political journalist because of this experience,” she said adding: “David Miller, watch out … I’m back.”

When asked about a possible run against Miller in 2010 she didn’t rule it out, but needs a some time to recuperate from this byelection.

“Please just let me catch up on my sleep. I haven’t slept for 35 days,” she said. “I can’t think about that right now.”

Finishing third was three-time candidate Julian Heller of the New Democratic Party with 16.5 percent of the vote, who was unable to speak to the Town Crier before press time.

Fourth place went to Green Party candidate Chris Chopik with a disappointing 5.4 percent of the vote, down from 8.34 percent in the 2007 general election.

In spite of the results he said the party was laying the ground work for the future.

“I learned a lot about politics,” he said. “There’s a lot of flexibility in the rules (parties) can play by.”

The remaining six candidates running in the byelection received a combined total of under 500 votes.