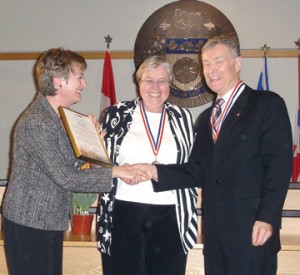 Agnes Macphail was Canada’s first female MP and a champion of social justice.

On March 24, she would have been proud of the man who received the award named in her honour. Geoff Kettel was recognized for the work he has done in East York.

Though he was delighted and overwhelmed with the accolade, Kettel said he was concerned with the lack of familiarity people have with Canada’s trailblazer for women’s rights.

Kettel is no stranger to the kind of dedication and leadership Macphail displayed during her life.

He served on the East York board of health for 12 years and founded the Thorncliffe Park Neighbourhood Night Out festival in 2006.

“It takes an extraordinary amount of energy to be a volunteer, but at a skilled level,” said Lorna Krawchuk, the 2007 Agnes Macphail award recipient. “We’re not just looking for someone who just comes and helps.

“The search is for somebody who comes in and sees a need and actually does something.”

Kettel’s community involvement isn’t limited by the borders of East York, either. He ran for Ward 26 councillor in Toronto’s 2006 municipal election and worked with Beaches-East York councillor Janet Davis on revitalizing Todmorden Mills.

Buoyed by his family — wife Adele Freeman and children Emily, Lindsey and Peter — Kettel stressed civic responsibility and working together are extremely strong core values for him.

“In Canada, it’s absolutely critical because everyone comes from different places,” he told an audience of about 50 people at the East York Civic Centre. “We need strong communities and strong links across communities.”

“(Macphail winners) are committed to social justice, to building community, education, equal rights,” said Davis, whose office funds the Macphail award ceremony. “Geoff has exemplified the commitments for many years in the voluntary sector.”

Before a standing ovation, Kettel received a framed certificate, medal and the year’s contributions to the Macphail Fund, given to the charity of his choice.

A cheque for $2,000 was given to Project CANOE, a not-for-profit organization dedicated to helping at-risk youth build life skills through canoeing and outdoor trips.