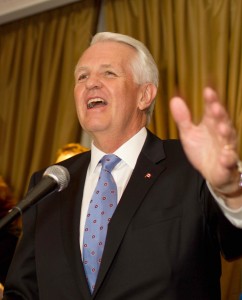 The businessman turned politician was one of seven to break down the Liberal fortress of Toronto with a Conservative blow.

Camped out at Spirale Banquet in the Donway on election night, Carmichael had a twinkle in his eye as he took the stage to the hoots and hollers of supporters.

He spoke of his six years trying to get elected in the riding.

“It’s been 23 years since John Bosley was elected … and tonight we’re finally sending another Conservative,” he said.

Among all his immediate family members up on the stage, Carmichael admitted his family was why he was in politics.After all, so many shoulders to lean come in handy after three federal elections.

“Some would call it perseverance, others might call it something else but we came close last time and we felt we could win,” he said over his slim loss to now-defeated Liberal, Rob Oliphant.With the added victory of a Conservative majority, Carmichael was quick to hush whispers of a possible portfolio.

His wife, Kerry, said she was supportive with whatever role he has in Ottawa.

“I think a lot of things came together this time,” she said. “The national atmosphere was right and anyone who knows John Carmichael knows that he never starts something he can’t finish.

“We know the route to Ottawa.” 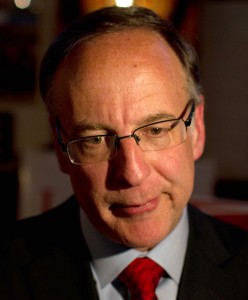 Carmichael narrowly fought off his Liberal contender Rob Oliphant by under 500 votes as of midnight making his victory speech at 11:10 p.m.

The ousted incumbent won in 2008 with 44 percent of the vote. At that time it was a race to replace former Grit MP John Godfrey.

Moving to the Fox and Fiddle, the mood was far from positive as Liberal Rob Oliphant warned his supporters about a Conservative majority, using the mythical phoenix as the analogy for a Liberal rebirth.

His tone bordered on a war cry.

“There’s a kind of a craziness that happens in elections that you can’t control and offer it up as the people’s decision,” he said.