All have a unique campaign style

The Town Crier’s Brian Baker spent four hours over Sept. 4 and 5 shadowing the four leading contenders in the St. Paul’s byelection to illustrate an ordinary day during a campaign. Starting early Friday with the New Democratic Party’s Julian Heller, moving into the late morning with Progressive Conservative Sue-Ann Levy and following up in the afternoon with Green Chris Chopik he watched them greet commuters, businesses and residents. On Saturday morning, Baker travelled to Wychwood Barns to watch Liberal Eric Hoskins greet shoppers at the farmers’ market. 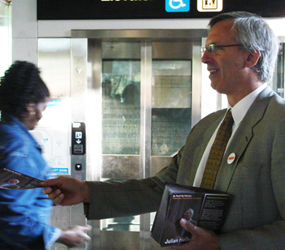 There’s an ebb and flow to their wave through Eglinton West station. Standing in the current like a buoy, clad in black slacks and a tweed jacket is one of the hopefuls in the upcoming St. Paul’s byelection.

“Hi there, I’m Julian Heller”, he says to the tide of people, “and I’m your candidate from the New Democratic Party.”

He hands out pamphlets, noting he’s already gone through 300 in 30 minutes, and by the end of the two hours at the station he predicts 400–500 will be given out.

As an elderly gentleman approaches, Heller introduces himself only to be met with a sharp “I don’t care.”

“The challenge is always to establish for people who are dissatisfied, that they can put their faith in you,” he says of negative reactions. “I think it’s very meaningful to them when I tell them I fought the fights with them: issues related to development, transit, schools, health care.”

One brief moment of negative feedback is met with the polar opposite from another gentleman rushing to work.

“Welcome back,” he responds to Heller’s greeting, referencing the third time the NDPer has run for provincial office.

“The biggest challenge is to find the hours in a day to meet as many voters face-to-face as we can,” Heller says, adding he was up at 5:15 a.m. the previous morning and home at midnight.

For Heller, the proposed harmonized sales tax, mass transit, education funding and the continued presence of the Ontario Municipal Board as a “dark cloud over the ability of neighbourhoods to decide what should happen in their community” are what matters most.

What’s stayed with him the most during the campaign was a chat he had with a 102-year-old man who was enjoying a beer on his back porch, joking with his 84-year-old neighbour.

“If you can’t get pumped up after meeting people like that you need to go into a different line of work,” Heller says. “Everyday has a different conversation that gets embedded into your brain.”

The time passes as quickly as the commuters, and Heller departs for his next appointment: canvassing neighbourhoods.

One observation Levy has made in her first foray into politics from her full-time career as a journalist, she says, is the diversity of the riding.

From the ethnically diverse populous in the west end to the rolling mansions of Forest Hill, Levy says being overtaxed not just at the provincial level, but at the municipal as well, is top-of-mind.

“People in rental buildings, when they hear about how their rents are going up, are really, really concerned about that.”

She approaches each customer with a small flyer highlighting all the goods and services affected by the HST.

But Levy says other key issues that voters have raised are the Ontario Lottery and Gaming Corporation and eHealth spending scandals, and a distrust of politicians.

“Following the garbage strike, municipal councillors ran and hid, and provincial MPPs were nowhere to be seen either. No one was there advocating for Torontonians.”

Being a high profile critic of the city’s top brass hasn’t hurt Levy on the campaign trail.

“There’s been a lot more positive,” she says. “People are a lot friendlier and respectful at the door than anything I’ve ever experienced at city hall.”

A bigger concern though is when she comes across apathy among residents.

As the afternoon sun burns off the morning, Levy is delighted with her decision to enter politics.

“I said to my wife yesterday, ‘I’m so happy I did this because win or lose, I am going to win’,” she says. “I’m going to learn so much about the campaign process from the other side to make me a better journalist.”

And the campaign has also kept Levy on her feet.

Dressed in a casual button-up shirt and jeans, he shares a glass of water while his son Levi offers him cherry tomatoes from the garden.

He’s frank about the troubles facing the Green Party as it gathers a higher profile in Canadian politics, and what he’s learned in his first campaign for office.

“There are things in life that unless you’re a politician or a very narcissistic person you don’t broadcast to the world,” he says. “I’m learning that I need to be more boastful of the things that I accomplish and the things that I do, and it’s hard because it’s not in my nature to do that.”

The realtor shares a moment where he mailed his former football coach at Northern Collegiate a $1,000 cheque for a new scoreboard at the new Clark Pulford field yet to be completed.

“Clark was my phys-ed teacher … I did everything. I pole-vaulted, I was on the track team and I was captain of the junior football team, and I have a strong connection to that place.”

The biggest challenge facing Chopik is breaking stigmas attached to the Green Party.

“People can believe in my capability to do the job effectively and my personal trust relationships in the community speak to that, but also what I’ve done in my career and what I do every day in my business speaks to a level of commitment to the Green Party’s mandate.”

Chopik says voters feel the Greens are stealing votes from the NDP and Liberal supporters believe they’re splitting the left.

“It’s so frequently about what we’re against and our vote is motivated by fear of something awful instead of our hope for something great,” Chopik says.

The solution is cooperation.

“Everybody else says a strong voice of opposition, but I don’t understand,” he says. “We’re here to do something for our constituents, that’s provincewide, we’re not here to battle each over minutia and get nowhere.”

He spends ample time answering the questions of those in the homes he canvasses. After a tour of the neighbourhood he returns home. It’s now time to prepare for a fundraiser he’s hosting that night. 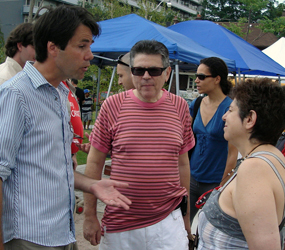 Constituents have approached him with questions on the HST, education, healthcare, and for him it’s been a great way to connect with them and the issues.

“It’s been exciting and informative and at the same time it has given the residents of St. Paul’s the opportunity to get to know me better,” he says. “And to understand the kind of representation I would provide should they express their confidence in me as their next MPP.”

Much like his opponents, he’s been burning the midnight oil to reach out to voters.

“It’s easier to ask how many hours a day I’m not putting into it,” he says with a laugh. “It’s from dawn to dusk.”

But from the effort he’s put into the campaign he’s been able to gather information from St. Paul’s to formulate his own perception of the issues.

“I look at it a little bit differently,” he says. “The one big issue is what I call community development, sustaining our communities.”

He handles criticism of his party’s handling of the HST, OMB and eHealth by offering a full explanation.

“When people raise (the HST) with me it’s mostly they want to be informed,” he says. “They feel they’ve got part of the story but not the whole story.”

With one of the highest education attainment level on per capita basis, Hoskins adds St. Paul’s is a community that does its research, especially on HST.

“This shouldn’t be crass politics or a wedge issue, this is an important decision that demonstrates leadership, and I should mention Flaherty and Harper are providing us with $4 billion to roll it out.”

But his grand task isn’t discussing the merits of the harmonized sales tax, it’s about meeting the over 110,000 voters in four weeks.

“My biggest challenge is to give them the information about me as an individual and about the party in general,” he says. “For me it really is a numbers game, how can I do my best to reach out to them.”

By early afternoon, the market is closing down, and Hoskins is fast on his feet to his next project: working the phones at the campaign office.