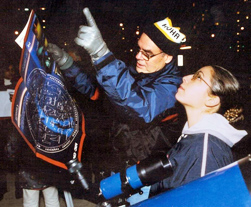 He was accused of being an upstart, heretic and rebel.

But Tuscan astronomer Galileo Galilei’s discovery of four moons orbiting Jupiter in the year 1610 would forever change the way people saw their world: no longer the centre of the universe.

Almost 400 years later, Galileo’s theory of heliocentrism, subsequent fight against the Church and advancement of science are being celebrated globally in 2009 as the International Year of Astronomy.

For Andrew Allender, 11, when you say the name Galileo, there’s excitement in his voice as he describes the great scientist.

“It inspires me how there’s so many different galaxies out there, and not just our own,” Andrew says.

He spends most of his star studies immersed in books, and watches specials on History Television to satisfy his interest in the science.

“I just find astronomy to be really, really cool,” he says. “We’ve been doing science since the beginning of the year and we’ve learned so much in our class.”

It’s very gratifying to see astronomy is something young people are still interested in, novelist Robert J. Sawyer says. But he admits he’s astonished since no human has been more than 500 miles from earth in 36 years.

“When I was growing up as a kid in North York, you could see a lot of stars on your front lawn in the 1960s looking up in the night sky,” he says. “So it was kind of natural for my generation of kids to look up and be fascinated by this. Plus, of course, we had the Apollo space program going on in the 1960s.”

Sawyer points to today’s science curriculum in schools as one factor shifting interest away from the final frontier and more toward environmentalism and ecology.

“Now, I think actually this interest in space and just the wider picture comes out in large measure from the ecological movement,” he says. “Kids are brought up today as one small part of vast systems instead of, ‘We’re the top of the evolutionary ladder and top of the food chain’.”

With the International Year of Astronomy officially kicking off with a big bang in Paris, France, Canada will hop on board with its own festivities in Ottawa, Jan. 7 and Toronto, Jan. 10.

The Ontario Science Centre is bursting with anticipation for the celebrations and 2009 will be the perfect year to highlight humanity’s curiosity, says Sara Poirier, space sciences researcher and events programmer.

“Humans are explorative, we always have been,” she says. “There are so many mysteries out there.”

The hit with kids, though, are the star parties.

“Star parties are free events where people bring their telescopes to look at the night sky,” Poirier says. “That’s a real treat, but it can be really intimidating to buy your own telescope . . . So if you go to a star party, everything’s all set up for you.”

The Science Centre is also connecting with various astronomy groups, including the Royal Astronomical Society of Canada, which organizes events through regional offices across the country.

Kim Hay, the society’s education chair, says it is planning events galore for the Year of Astronomy nationally. Together with the Fédération des Astronomes Amateurs du Québec, the Canadian Astronomical Society and science centres, it will bring astronomy to the public through special lectures.

“(Year of Astronomy) is a worldwide event and Canada has planned major events throughout all of the larger cities as well as the smaller cities,” she says, adding she’s looking forward to the year-round festivities.

As for Andrew, he’s content just staring into space, dreaming of a galaxy far, far away.