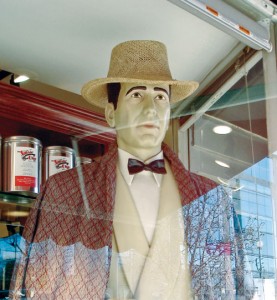 The ball diamond I stand before is named for a former Leaside mayor, but it begs the question: Was Talbot a fan of hardball?

I know Howard Birnie, who’s been involved in Leaside’s ball league for years, loves the game and it shows in his never-ending dedication.

Much like my dad out in my hometown Whitby who has been involved in amateur sports for over 20 years.

Anyone who does that should have a baseball park named after them.

But enough of my thoughts about growing up on grass infields, the cracking of bats and the people who keep the game going, I’m here to explore another part of Leaside.

I haul myself up the hill to Eglinton Avenue, passing a recently snazzed up McDonalds and head south on Bayview Avenue.

The sun is shining brilliantly. The air is fresh and somehow I feel like I am walking the streets of small-town Niagara as proceed down the main drag.

I enter the commercial district stacked aplenty with independent shops like the Noble Haus, the Flying Dragon — a children’s bookstore, and The Merchant of Tennis.

In the window of a cigar shop, a statue of Rick Blaine, Bogie from Casablanca, is doing his best Hugh Hefner, donning a housecoat, holding a pair of aviators and wearing an odd looking straw hat.

Beside Bogie’s home is a shop with an intense pink that looks like the Energizer Bunny was ground up and added to the painter’s mix.

Further down, I notice several barbers’ poles adding to the small-town feel. Plus there’s an old theatre that’s been converted into an Aisle 43 wine shop and Hauser furniture store.

As Jo Dee Messina twangs to me about a “Lesson in Leavin’” the smell of herbs assails me on the afternoon breeze.

I seek out the origin and notice Epi Breads at Millwood Road. I hang a left and depart from the storefront strip to enter residential Leaside.

The homes on Donegall Drive are an olio of designs, but most abundant are Edwardian boxy architecture with brick and stone facades.

Suddenly an urge for chicken wings slathered in suicide sauce from Duff’s hits me like a linebacker.

Still I roll on, noticing ivy leaves crawling up trunks to boughs of maple trees. There’s snow on the ground, but it’s spotty like kettle lakes across Ontario’s north.

With Bayview on the other side, one would expect to hear the traffic, but all I hear is Missy Elliot telling me to “Get Ur Freak On”.

Switching tones from dance to country with John Michael Montgomery coming on I notice a mailbox looking like a cottage at one home. In its garden dried out, golden blossoms of hydrangea hang like brains on spits.

A few homes still have wreaths and pine garlands decorating ornate front doors. Even though Christmas is long since passed the accents still fit.

I cross Parkhurst Boulevard and stunned by a home that looks identical to a gingerbread house.

It’s deep umber trim, white base paint and stone façade is gracious mix that looks like something from a Bavarian village.

As I turn to continue I notice the road beside me is growing fur. Or could it just be a squirrel that has met its Waterloo.

On that flat note, I think it’s time I head back the apartment and get ready to watch my New Orleans Saints take the Indianapolis Colts to the glue factory.