For Rosedale Heights School of the Arts’ alumna, Rosamund Small, seeing her immersive play Maven performed by her alma mater was incredible.

“It’s a pretty huge artistic opportunity,” the Dora Award winner said. “It was really joyful to work with the students.”

Her play was commissioned by the school’s drama department, helmed by Tamsin Kelsey, so it could accommodate the 81 students and three teachers that were in Grades 11, 12 and fifth year.

Having a playwright come in and workshop with the students had been a plan for several years. The drama department saved money by building a fund for a “major commission” and supplemented the project through fundraising and arts enrichment funds.

“This was very important to us — we weren’t interested in asking someone to write for free just because we were a public school,” Kelsey wrote in an email. “The script met our needs because it was written with our students and our unique program in mind.”

For five nights, theatre goers were immersed in a fully interactive environment as the school was transformed into the universe of the students of Maven Academy. The fictional school is set in a dystopic universe where teenagers are forced to take a magic all-changing pill that makes everyone make the perfect choice. 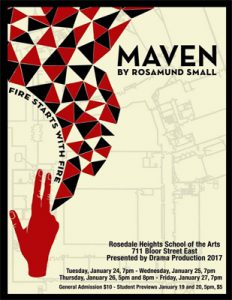 However, Maven Academy students are the exception, and are free to keep their emotions.

Of course, the toughest undertaking was find a play that could accommodate such a large cast and crew.

“Few plays with large casts provide enough ‘meat’ to justify curricular demands and still remain accessible to the adolescent imagination, whether audience or practitioner,” Kelsey said. “We really wanted a play that would capture the imaginations of our students and our school community.”

As for Small, a Nora Epstein National Literary Award and Dora Award winner, the workshop she did with students a year ago was just the opening act. She admitted she was blown away by the depth of imagination the students displayed, as well as their attention to the world around them.

The result was something organic, and something Rosedale Heights’ drama department can be proud of.

“I don’t think of it as my show, I think of it as the students’,” Small said. “It’s bursting with creativity. The detail and dedication they put into it. They’ve transformed their entire school.”