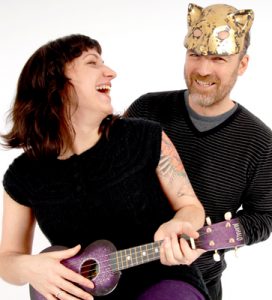 It’s a New Year’s resolution for electronic duo Jessie Davis and Kevin Lynn to book a live show in 2010.

On a lazy Sunday morning, the members of Meniscus Curve and newly engaged couple — as recent as the night before — grab brunch under the LED Christmas lights that decorate Bloor Street’s Green Room.

“It’s gotten to the point that all of the songs were written with musical instruments,” Davis says, adding Lynn has recorded the guitar beats, gathered the drum samples and molded them together on his laptop.

The only problem: getting a band together for a live performance.

“I come from a total live playing background, so I don’t actually like watching laptop shows personally,” Lynn says. “When a guy’s up there just pushing play, I find it really boring.”

The Broadview and Gerrard couple wants to revisit life as full-time musicians, as Lynn spent 20 years playing in bands like King Cobb Steelie and Holy F*** and Davis lived on the “poverty diet” as a solo folk-rock musician.

“It’d be nice to actually go back to that. It’s a struggle,” Lynn says. “Once you do it it’s hard to go back to the regular life.”

In the meantime, Davis works as a virtual assistant, doing research and running errands for clients, while Lynn stays in music working for an independent record label.

But their collaborative efforts on their album Static Cling, and band (named after a scientific term referring to liquid interaction) remains their beloved opus.

Even with the announcement of their planned nuptials, nothing changes, as it’s their relationship and working together on music that draws them closer.

“I’ve never worked on music with anyone,” Davis says. “I’ve always done it by myself, so to meet the love of my life, to live together and work together on music, it’s been incredible.”

The sentiment is not lost on a quiet Lynn.

“Jessie has really good musical instincts, which drives me crazy,” he says with a laugh. “It’s one of those things where I will be working on a track and she’ll say, ‘Why don’t you just do this’, and I’ll be like, ‘No, that doesn’t work at all’.

“Three days later I’ll do it and it will make total sense.”

Six years after meeting at Sneaky Dee’s the two have learned to mix their diverse musical backgrounds together.

“He gave me a CD of a track he had just finished putting the music together for, and I had just literally written lyrics down the day before and I pressed play on the CD player and started singing and I ended right when the music stopped,” she says. “There was this perfect fit of music to song so I took it as a sign that we should keep going.”

It’s been music and lyrics ever since.

The results are ambient, haunting vocals wrapped inside cozy drum and bass rhythms.

It’s their hard work that proves the couples’ musical magnetism can staccato breaks.

“I offend him a lot by saying, ‘I don’t like that, I hate that’, but at the same time, I know if I was working with someone else that truthfulness wouldn’t come out,” Davis says, with a grin curling like their band’s namesake.